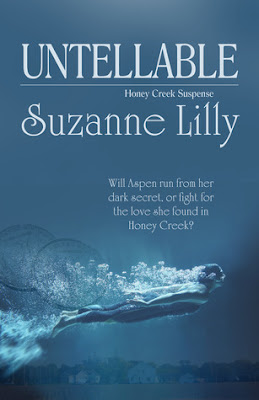 Goodreads Summary:
Aspen Dwyer, recently emancipated from foster care, is searching for a place to hide from a past with secrets too dark to share. Honey Creek, Ohio, presents itself as the best place to start a new life and stay undercover. There she meets Colton Moraine, a man with strong family ties and an even stronger sense of loyalty. His boisterous, loving family welcomes Aspen with warmth she hasn’t felt in years. She’s surprised at how quickly and deeply she falls for Colton. When a dangerous criminal comes to Honey Creek, intent on his revenge against her, Aspen must choose between two options. Should she stay and risk her life and the rejection of the people she’s grown to love? Or should she run again, and leave behind any chance of a happy future?

Title: Untellable
Author: Suzanne Lilly
Publisher: Turquoise Morning Press
Release Date: February 24th 2013
Rating: 3 Stars
Review:
First Take -
A unique and interesting story that draws you in for more. The cover gives a dark and intense vibe, which flows well throughout the novel. Aspen has been emancipated and is on the run from her father. She has had a terribly tragic past and is trying to escape from its shadow.
The Characters -
Aspen is a driven individual. She is hardened by the her past yet still an insecure girl that was robbed of a proper childhood. I would have liked her to grow more, which could only happen if the novel was longer.
Colden was the bright light in this novel. He had a great sense of humor and was exactly what Aspen needed. He was someone she could depend on and after living in foster care that is something she has never had the chance to know.
Elise, while you are an interesting character I was not a fan. I couldn't get over the fact that a true friend would never use their friend to get ahead. She fell into the selfish journalist stereotype for me.
Rick, her father, was a terribly scary man. No one should ever have to deal with a guy like that let alone should a guy like that ever have kids. He was an extremely terrifying villain.
The Plot -
I really liked the direction this novel took. It could have been longer and an overall more developed, but for the length it was, I enjoyed it. A valuable coin isn't always something to kill for but it worked will in this story. The romance as a subplot to me felt forced and could have used a lot of work. While Colden was a great character and so was Aspen when a romance is forced it just doesn't come across as well as it should.
Overall -
This story gets three stars, for the interesting plot that kept me in tune to the story and the characters that were just living their lives.

Recommended reads based off of Untellable:
Perfect Chemistry and Going Too Far
Posted by Unknown at 12:00 AM
Email ThisBlogThis!Share to TwitterShare to FacebookShare to Pinterest