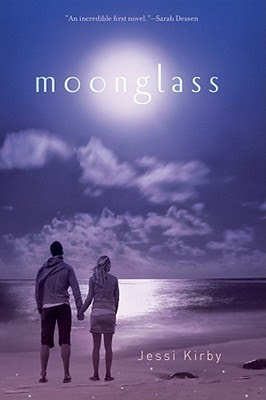 I read once that water is a symbol for emotions. And for a while now, I've thought maybe my mother drowned in both.
Anna's life is upended when her father accepts a job transfer the summer before her junior year. It's bad enough that she has to leave her friends and her life behind, but her dad is moving them to the beach where her parents first met and fell in love- a place awash in memories that Anna would just as soon leave under the surface.
While life on the beach is pretty great, with ocean views and one adorable lifeguard in particular, there are also family secrets that were buried along the shore years ago. And the ebb and flow of the ocean's tide means that nothing- not the sea glass that she collects on the sand and not the truths behind Anna's mother's death- stays buried forever.

Again I find my hopes held high for yet another book that drops me in feces. I thought this was going to be one of those books that rattles you to the core and when you are finished you feel reading it you feel like you have become a better person. Okay, so I realize that is a lot of pressure to place on one single book without having even read it, but I did think it was going to be awesome.

Overall I found the story to be average. The characters were strange but lovable. What I mean by strange is they did not follow the everyday paradigm that most YA realistic fiction characters follow. Anna had substance and so did those that surround her. Anna is a troubled teen who is still effected by her mothers depression. Anyone would be messed up if they went through the same situation she did, her mother committed suicide by walking out into the ocean while Anna watched her when she was young.  So now, years after her mothers suicide, her and her father have moved to the place where parents met and fell in love, during the happiest moments of her mothers short lived life.

I felt bad for Anna a lot in this story, which is why I think I had a hard time connecting with her. I thought so much of the problems the characters had could have been solved if they just talked to one another. I know it is hard to lose someone and it is even harder to except that loss. But years after a suicide I would really want to believe that you could talk about your feelings with your parent or friends.

Another reason this story didn't reach my expectations was because Moonglass felt so... unfinished. When the last page was finally turned, I felt there should have been at least another fifty or sixty pages to go. I needed more meat (or if you are a vegetarian eggplant) to the story. There was so much more I needed to know about the characters and their outcomes. Jessi Kirby had me thinking there was going to be a sequel but as far as I can tell there isn't going to be one.

Moonglass started out with a depressed, lonely teenage girl, and it ended nearly the same. I didn't feel Anna really develop into a full character. I wanted her to have a more uplifting ending, to be happier than when the story started. And sure, she has friends and a man friend but I still felt she was the same Anna. I know it is very common to end a book in YA so that the reader can interpret the end and what happens next with their character. But that was just the problem for me in this book, I can't picture her being extremely happy in the future. Maybe slightly better off but there was way more she needed to go. Which is why I felt there could have been more explained and then they could have left me with an open ending, making me want more.

The things I enjoyed about this book was the unique characters. I just wanted a little more from all of them. Which could have been done by a more developed story.

My final verdict is that this is a good book, not a great one. I would suggest that if you already wanted to read it, to read it. But... if you weren't searching out this title before, no need to seek it out now.

Posted by Unknown at 2:00 AM
Email ThisBlogThis!Share to TwitterShare to FacebookShare to Pinterest