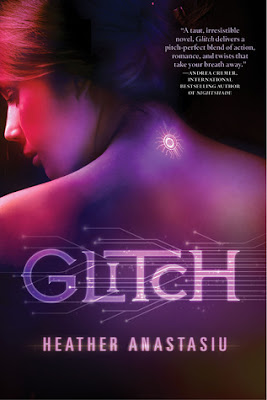 
In the Community, there is no more pain or war. Implanted computer chips have wiped humanity clean of destructive emotions, and thoughts are replaced by a feed from the Link network. When Zoe starts to malfunction (or "glitch"), she suddenly begins having her own thoughts, feelings, and identity. Any anomalies must be immediately reported and repaired, but Zoe has a secret so dark it will mean certain deactivation if she is caught: her glitches have given her uncontrollable telekinetic powers. As Zoe struggles to control her abilities and stay hidden, she meets other glitchers including Max, who can disguise his appearance, and Adrien, who has visions of the future. Together, this growing band of glitchers must find a way to free themselves from the controlling hands of the Community before they’re caught and deactivated, or worse. In this action-packed debut, Glitch begins an exciting new young adult trilogy.

* Received from Netgalley and St. Martin's Press for an honest review.

In the world of Glitch, the people are closer resembled to robots, or drones than actual human beings. The only ones capable of glitching are children and teens. The ones who have yet to get their permanent v-chip installed. Our main character Zoel, better known to her glitching friends as Zoe, is glitching big time. But not only that, she has a secret, a secret power. She can move things with her mind.

This is a dangerous power and an even more dangerous secret. When she is not glitching, she is in the link, a perfect follower, no different from anyone else. Seeing only in gray, and even contemplating turning herself in as a glitcher, to keep the community running in perfect order. That is what she should do, what she is programmed to do. But when she glitches, she is able to feel emotions she doesn’t even know how to describe. Emotions that existed long before the community had to move below the surface of the earth because of the Nuclear Holocaust, emotions that brought on it's very own destruction.

Glitch explores a wide range of emotion. The descriptions in the novel were very well received. I felt as if I was experiencing these emotions with Zoe for the first time myself. Sweet and innocent, Zoe goes on an adventure and later cannot recall what has happened. So much is out of her own control and in the hands of the Uppers, the ones that try to catch glitchers and either fix them or deactivate them.

On her quest to figure out what happened during her memory lapse and her newfound urge to escape, she finds out a boy she knows very well is also a glitcher. This boy is Max, now Max is exactly what I would expect him to be. A teenage boy, who has never once experienced emotions and has to absorb them all at once. He is pushy, needy, and clingy; basically he is the boy that just wants sex, magnified about one thousand times. He can’t control his emotions and that makes him dangerous. He goes on and on about the passions Zoe, not understanding what he is asking, complies. She lets him in her world, but is always cautious of his incessant need.

Not only is their Max but there is also Adrien, that is right fellow readers, another lovely Adrien. He might just have had that in his favor that there is already a lovable Adrian out there in book land that I could associate him with. He is in control to the extreme. The exact opposite of Max, but he has some secrets of his own. Deadly games are played with these two boys involved in Zoe's life. But she can't leave anyone behind, now that she can see the world through her own eyes. Everyone has to play their role if they want to escape this world of computer chip control. Zoe has to figure out who to trust, and if she can learn to trust her own emotions, even though they are so new to her.

One of my favorite things about this book is that nothing is left unexplained. There is so much information that is perfectly laid out for us to gather along the way. There is a deeper exploration of love, and passion. Even getting into the interesting idea that love is a reaction of not just the mind, but the body as well. Anastasiu knew exactly what she was doing when she created each of these characters. She had a well thought out plan for Max, Adrien and Zoe. This book kept me in tune and had my heart pumping for what could possibly happen next. I look forward to reading the sequel!

I would recommend this book for those that enjoyed:
Delirium
Posted by Kelley Lee at 10:10 AM
Email ThisBlogThis!Share to TwitterShare to FacebookShare to Pinterest