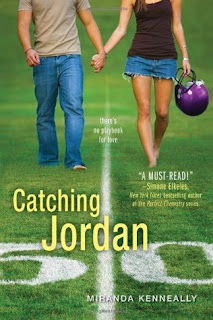 What girl doesn't want to be surrounded by gorgeous jocks day in and day out? Jordan Woods isn't just surrounded by hot guys, though-she leads them as the captain and quarterback of her high school football team. They all see her as one of the guys, and that's just fine. As long as she gets her athletic scholarship to a powerhouse university. But now there's a new guy in town who threatens her starting position... suddenly she's hoping he'll see her as more than just a teammate.


I have read this book more than once now and it was just as good as the first time, maybe better. This is one of those novels that has you salivating at the mouth for more. I am dying to know what happens to them next. Unfortunately, there is no direct sequel...yet. Only companion novels at the moment. I know after you read this novel you will be crossing your fingers with me hoping for a Catching Jordan 2, Caught Jordan, or Catching Michigan. Just me? Well that's because you have yet to read this masterpiece.

I love the language used in this story. Very fitting to the setting and everyday teenage vocabulary. In this novel there is no shying away from cuss words and sexual references because it's unladylike. Shit no! The way the characters talk is very believable to their personalities. By no means is the use of swearing or sexual reference overdone or too much. It is subtle and realistic.

If you have any experience being a jock, or being labeled a "tomboy" then you can easily relate to this story. If you have no experience with either of those things, then there is still plenty to relate too, you may not understand the football part of the novel, but you will understand the true grit emotions that Kenneally expresses. The main character, Jordan, (That's right the title is not about catching a boy named Jordan, no sir-e-bob, it's about catching our lovely star.) Star and captain of the high school football team that is. You will have yourself thinking that if only you would have picked up football, this could have been your life. Jordan is the QB of her team, she has been the starting QB for two years now and even led the team to the state championship the prior year. Unfortunately, she threw and interception at the very end of the game and because of that throw, her team lost the championship. Now, it is the start of Senior year and she will do anything not to repeat last years mistakes.  Lucky for her, she has the skill and determination to succeed and is the best football player in all on Tennessee.


This is where we are thrown a curveball. Competition saunters into her high school, he's a hot new former Texas state champion. His football position, none other than QB. He just moved to town and he wants to be on the team too. Only her spot on the team isn't the only thing he's after, he's also got his eyes on her heart. Jordan doesn't know what to do about Ty Green. Her best friends, Sam Henry, Carter and JJ are no help when it comes to love and her inexperience is seriously lacking when it comes to romance. Especially, when you have your best friend, a guy, aka Sam Henry, sleep over all the time, in the same bed... What's a girl to do, she knows how to lead a team on the field, and she is well respected by her team off the field. She is the best high school QB in all of Tennessee, but will it matter when she starts feeling the pressure of being recruited to a team that is only judging her based on her gender and not her talent.

Would it be settling to go to a school, or date the guy because your told it's the best choice, only to be used and controlled? Or will it be worth it to search for that true love, the real place you fit in, even if the idea is scary and it may be harder to find or imagine?

This book is a great read. The characters stick with me well beyond the last page. I will continue to pick up Catching Jordan for years and years to come.

This book is recommended for you if you liked:
Playing Hurt, Pretty Tough, or Babe in Boyland
Posted by Kelley Lee at 7:03 PM
Email ThisBlogThis!Share to TwitterShare to FacebookShare to Pinterest