Jessica's Guide to Dating on the Dark Side 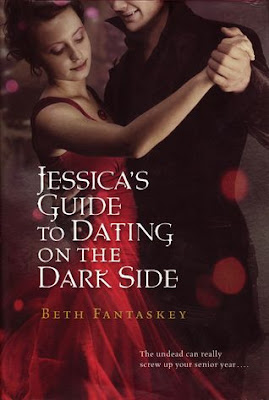 The undead can really screw up your senior year ...


Marrying a vampire definitely doesn’t fit into Jessica Packwood’s senior year “get-a-life” plan. But then a bizarre (and incredibly hot) new exchange student named Lucius Vladescu shows up, claiming that Jessica is a Romanian vampire princess by birth—and he’s her long-lost fiancé. Armed with newfound confidence and a copy of Growing Up Undead: A Teen Vampire’s Guide to Dating, Health, and Emotions, Jessica makes a dramatic transition from average American teenager to glam European vampire princess. But when a devious cheerleader sets her sights on Lucius, Jess finds herself fighting to win back her wayward prince, stop a global vampire war—and save Lucius’s soul from eternal destruction.

This was an interesting story. I liked the culture that we experience in this novel, getting a taste of Romanian vampire-lore. Jessica is an ordinary teenager, or so we think, she was adopted at a very young age, by her hippie-vegan parents. She tries all she can to fit in, but when the new exchange student comes into her life, she learns she is anything but normal.

Jessica comes from a long line of vampire royalty and she is the last pure strand of her family left. Since her birth she has been betrothed to the handsome Lucious, who is oh so luscious. At first she runs away from the idea of being vampire royalty, from even being a vampire. But slowly she comes to terms with her destiny, and in the end even embraces it.

The story jumps off right away and for the first 2/3rds of the book I found myself thoroughly enjoying myself. Then, in the last third of the book we hit sort of a dead zone. There is a lot of nothing happening in this portion. A lot of us sitting around waiting for something to take action. The beginning, where we are immediately thrust in the story, dies slowly and kind of trugs along. My major qualm with this is the fact that when it jumps out of the lull, everything after happens to quickly and unrealistically.

We speed through the motions and learn some unnecessary information. Overall, this novel is good, but not great. I will put the sequel on my to-read list, though. The story was good enough quality that I do want to find out what happens next.

Recommended for people that enjoyed:
Blue Bloods or Vampire Academy
Posted by Kelley Lee at 12:15 PM
Email ThisBlogThis!Share to TwitterShare to FacebookShare to Pinterest