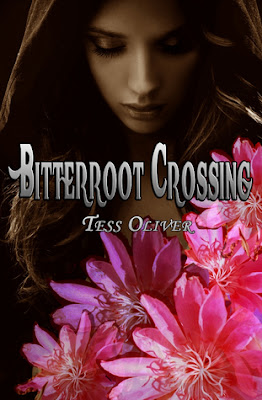 
A love triangle that crosses centuries . . .

For Nick Crush, the only thing cool about his town, Bitterroot Crossing, is the gang of outlaw ghosts that rise occasionally from the town’s swamp. But when he finds himself competing with the most notorious spirit and his own ancestor, Zedekiah Crush, for the affections of Jessie Sterling, suddenly the whole ghost thing isn’t so cool.

Jessie Sterling inherited her great-great-grandma’s shorter left leg and incredible beauty, a beauty that a century and a half earlier sparked a love triangle that ended in tragedy. Now Jessie leaves the safety of her grandma’s farm to attend high school in town . . . and Bitterroot Crossing will never be the same.

Let me explain the Sapp-o-Meter Reader before I get on to my review. Sapp-o-Meter ranks books that involve romance. When romance is done correctly, without being overdone, the book will get a zero, hence Angelfall. Now, when a book has overdone the romance to the highest possible extent, it gets a ten, so for an example there is Hereafter.

In my opinion a book should never, and I mean NEVER, have to go above a zero, but sometimes, it happens, and we live with it. It can be manageable if the story is still entertaining enough. This book, scored a 4.5 on my Sapp-o-Meter because of it's over-dramatics and world revolving love.

In overall ranking I would give this book a solid 2.5 stars. My reason for this is because it was better than okay, but it wasn't something I would be out there demanding people to read it because I liked it. That is just too strong of a word. It was by far an enjoyable book to read, and I read it all in one afternoon.

Jessie, one of our main characters, is an innocent girl who has been home schooled all her life, and never so much as stepped a foot towards the small town of Bitterroot Crossing. When social services has come after her mother died, demanding that she goes to public school, her grandmother is terrified.

You see, Bitterroot Crossing is a ghost town. 150 years ago Zedekiah Crush, and his Crush gang were hung. Zedekiah Crush was in love with Jessie's great-great-great grandmother, Rebecca, and in a stand off with the towns lawman, Jack Bridger, over more things than the law. They were both in love with Rebecca, who was said to have the most beautiful face that ever graced the earth. Well, that and one leg shorter than the other. The day Zedekiah was hung he pulled the trigger, trying to hit Bridger, but Rebecca jumped in front of the bullet, he killed her instead of him. After that, he willingly took death by hanging. Bridger took care of him and his whole gang, and left the bodies there, over the land, to someday be consumed by the swamp, and to haunt the townspeople forever.

Now, back to the reason her grandmother is terrified, Jessie looks exactly like Rebecca, at least in all the pictures. She has even inherited her great-great-great grandmothers short leg. So, now her 'Nana' is worried that the Crush Gang and Zedekiah will rise from their swamp and start to wreak havoc on her granddaughter.

Jessie is beautiful, innocent, and she walks with a bit of a limp. How much trouble could she cause? Well in the small town of haunted Bitterroot Crossing, a lot. On her first day of school she meets Nick Crush, oh yeah, Zedekiah Crush's great-great-great grandson.

Nick is immediately drawn to Jessie's beauty, but so is Zedekiah's ghost. This is a love triangle, that can survive across the centuries. With both Nick and Zedekiah going head to head against one another for Jessie's love.

Now, the reason why this book doesn't get completely thrown out the window, is because the stories concept was actually exciting, and the action started immediately. There was no waiting around we just jumped right in.

The reason why this book does not get a topnotch rating from me, is because this story is told in alternating perspectives, and while that rocks, I absolutely love alternating P.O.V.'s, the characters started to completely mesh together towards the end. I would forget who is who towards the end and their voices were not distinguishable from one another. Plus, there is the sapp-o-meter rating of 4.5, this book is pure, what a woman wants to hear kind of thing. No realistic qualities to the story, even besides the stuff with the ghosts, it just wasn't real, and the solution was found way to easy. Lastly, the writing could use a little work, but I believe that was mostly because of the sappiness.

In all, I say this is an excellent fluff read for those bored and lonely days. Just curl up by the fireplace, get a cozy blanket, grab your comfort food and buckle in for a few hours of sappy love entertainment.

Suggested for people who enjoyed:
After Eden and Beautiful Demons

Posted by Kelley Lee at 4:10 PM
Email ThisBlogThis!Share to TwitterShare to FacebookShare to Pinterest