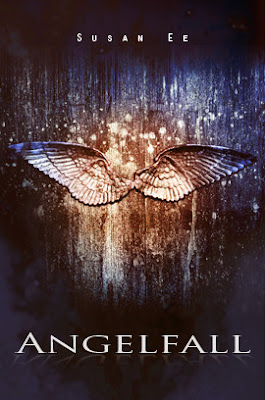 It’s been six weeks since angels of the apocalypse descended to demolish the modern world. Street gangs rule the day while fear and superstition rule the night. When warrior angels fly away with a helpless little girl, her seventeen-year-old sister Penryn will do anything to get her back.


Anything, including making a deal with an enemy angel.


Raffe is a warrior who lies broken and wingless on the street. After eons of fighting his own battles, he finds himself being rescued from a desperate situation by a half-starved teenage girl.
Traveling through a dark and twisted Northern California, they have only each other to rely on for survival. Together, they journey toward the angels’ stronghold in San Francisco where she’ll risk everything to rescue her sister and he’ll put himself at the mercy of his greatest enemies for the chance to be made whole again.

On my nook case there is a quote by Sir Christopher Wren. It says, "Choose an author as you choose a friend."

If that in fact is the case, Susan Ee is my very best friend of all. Her writing is magic. She had the undoubtable ability to wrap me in her web of graphic gore and hopeless odds against life and love.

Rather than being the all bearing and depressing post-apocalyptic world, like The Road, we find ourselves in the midst of an apocalypse of the angels. Six weeks after they have started their attack. All hope is lost to Penryn, her schizophrenic mother and paralyzed from the waste down sister, Paige.

Penryn is the one that is keeping her family safe, her unique set of survival skills and unparalleled confidence have her moving through the night, during the time even the gangs are afraid to come out.

One night, while Penryn and her family are on the move, a single beautiful feather falls from the sky. This feather does not leave Penryn feeling so positive, in fact, it exults pure terror in her bones. It is an angel feather, and where there are angels, there is sure to be death.

Penryn witnesses five angels beat up an angel, Raffe, with beautiful snowy-white wings. She tries to assist in anyway she can, while her mother and sister make a run for it. Raffe's wings are cut from his back, and the sinister angel who cut them turns his rage on Penryn and kidnaps her little sister.

Seeing the dying angel, she decides to bargain with him. She will act as a guide on earth, helping him survive on his feet, rather than with his wings, and he will lead her to where the angel may have taken her little sister.

I am so eagerly awaiting the next one, that I am practically in fangirl giddiness for it to be released. I am on the edge of my seat for what will happen next in this apocalyptic world, where angels are the thing of nightmares, and hell has encompassed the earth.

The only weird thing about this novel was the fact that I bought it in ebook format and it said it had 1457 pages, and whenever I turned one page it would say I flipped around twenty or so pages. This was all well and good until the very end when I thought I had fifty or so pages to go and I tried to flip the page and the story was over.

This book is well worth the buy. It was only $1.99 on my nook and I would have paid much more for it. Riveting, calculating, and unafraid to dive right into the depth of my soul and rip out some organs. This story will leave you wide awake contemplating what will be in store for you next.

Penryn is one of the most amazing characters to be inside the mind of. She is so bad ass, that she makes other bad ass heroines look not bad ass. *Sorry for my Adam Sandler humor*. Penryn has raised the bar, from now on she is the girl to beat.

Susan Ee, if you ever read this, please oh please get the new book out soon, and keep them coming! I am addicted to Penryn & The End of Days!

Recommended for people who enjoyed:
Partials or Hunting Lila
Posted by Kelley Lee at 12:27 PM
Email ThisBlogThis!Share to TwitterShare to FacebookShare to Pinterest