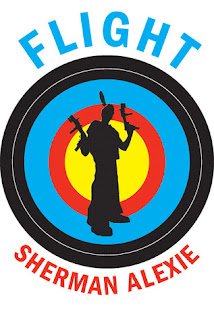 A gifted and accomplished storyteller returns with a powerful and timely novel of a troubled foster teenager. Simultaneously wrenching and deeply humorous, wholly contemporary yet steeped in American history, "Flight" is irrepressible, fearless, and groundbreaking.


This book was unlike any other book I have read before. Forget teen romance, forget crazy supernatural vampires and werewolves, but pick up a cynical attitude, a taste for defiance and a little time-travel and you found yourself smack dab in the middle of Flight.

The main character is Zits, at least that’s his nickname. He is an orphan and has been through numerous foster homes, usually never lasting more than a few weeks at any home. He is 15 years old and defines himself more by his features than who he is inside. He considers himself ugly and worthless. He holds onto the fact that his father was a drunk and never stayed around to claim him as his son, so even though he is half American Indian he doesn't have any official American Indian claims.

This story really kicks off after he was in jail for causing fights with his new foster father. While he is in jail he meets a kid nick-named Justice. Justice sees a weakness in Zits, he sees that he really just wants someone to understand him and takes advantage of that. He brainwashes Zits to do something really bad, and Zits does it and gets shot. When he wakes up, instead of being in a hospital, he is inside the body of an FBI agent named Hank from the 1970's.

Zits goes in and out of other peoples bodies throughout his journey and each time he learns something more about himself, like he has had all the puzzle pieces all along but he is finally starting to put them together. It is a short book and a very fast read. If you get bothered by cussing and genital size checks then I do not recommend this book for you, but if you can see the humor intended behind it than this is perfect!

I rate this book 4 stars because it is a great read and really is heartwarming, but it was a little short and I would have liked to know more about what happens next.

Recommended for people who enjoyed:
The Antelope Wife or We Were Here
Posted by Kelley Lee at 12:59 PM
Email ThisBlogThis!Share to TwitterShare to FacebookShare to Pinterest