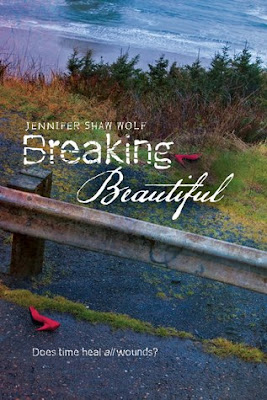 Allie lost everything the night her boyfriend, Trip, died in a horrible car accident—including her memory of the event. As their small town mourns his death, Allie is afraid to remember because doing so means delving into what she’s kept hidden for so long: the horrible reality of their abusive relationship.


When the police reopen the investigation, it casts suspicion on Allie and her best friend, Blake, especially as their budding romance raises eyebrows around town. Allie knows she must tell the truth. Can she reach deep enough to remember that night so she can finally break free? Debut writer Jennifer Shaw Wolf takes readers on an emotional ride through the murky waters of love, shame, and, ultimately, forgiveness.

This novel was... intriguing, interesting, and spine tingling, among many other things. We start off with Allie, in her bed, recovering from her injuries and most importantly hiding from her past and future. It has been weeks since her boyfriend, Trip, died in a car accident, the same car accident that has her suffering from memory loss and some rather heinous scars.

Throughout the story-line we go through flashes of Allie's memories of that night, trying to figure out the truth of what happened. With no body and no car (he drove right off the side of a cliff) there is an open investigation going on, and Allie seems to be the only one who can uncover the truth for this grieving town, morning the loss of this beloved teenager. Only, Allie is keeping a secret that is tearing her to pieces. Trip was abusive, to an almost deadly degree. She has kept the secret for so long that it seems impossible to come clean now. Especially when she and her long time friend from childhood, Blake, start to become close.

She is facing battles from outside and from within.

I have to say that the most gripping part of this novel was her internal struggle. I sat biting my nails trying to figure out when she was going to be able to tell another person her secret. She beat herself down, in an almost pathetic way. But she really had the classic symptoms of a victim of abuse. Her inner struggle was very believable and I kept wondering if someone who felt the way she did and went through what she did would ever be able to trust again.

Another positive was her brother Andrew. He has cerebral palsy, and is very lovable. Great personality and is a freaking genius.

Somethings I did not like about the novel was that it was pretty much all that I described, that was all that really gripped me about the plot. Other characters like the police officer, Trip's father, Hannah and James were really unbelievable. Towards the end the plot became very predictable. There was some moments before the end where I was laying in my room at two in the morning and I could swear I was seeing Trips ghost in my room. She did a great job scaring me, but she could have taken it so much further. Instead she took the easy way out and lets just say it turns out like your classic fairy tale.

I would say this book is definitely worth the try. It is a decent book and I read it in only a few hours. I know I will read it again in the future, but it isnt what I thought it could be. I wanted more and this novel fell short. Still good, but short.

Recommended for people that enjoyed:
One Moment or While He Was Away
Posted by Kelley Lee at 10:47 PM
Email ThisBlogThis!Share to TwitterShare to FacebookShare to Pinterest