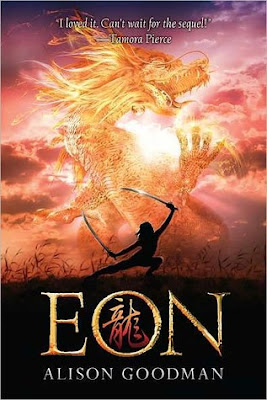 
Read Alison Goodman's blogs and other content on the Penguin Community. Eon--the award-winning crossover fantasy that soars! Sixteen-year-old Eon has a dream, and a mission. For years, he's been studying sword-work and magic, toward one end. He and his master hope that he will be chosen as a Dragoneye-an apprentice to one of the twelve energy dragons of good fortune. But Eon has a dangerous secret. He is actually Eona, a sixteen-year-old girl who has been masquerading as a twelve-year-old boy. Females are forbidden to use Dragon Magic; if anyone discovers she has been hiding in plain sight, her death is assured. When Eon's secret threatens to come to light, she and her allies are plunged into grave danger and a deadly struggle for the Imperial throne. Eon must find the strength and inner power to battle those who want to take her magic...and her life.

What a magical, enthralling piece of literature. Alison Goodman has outdone and exceeded my expectations. She is factual and enticing. All combined into one heart pounding, gut wrenching ride. Beautiful and intricately woven, Goodman combined Chinese and Japanese culture to create a world that was utterly her own.

Down to the details, Eon is training to be a Rat Dragoneye apprentice, and eventually a dragoneye lord, the most prestigious title to have other than being royalty. But he is the underdog, a cripple, in the land that knows it as the mark of evil. On the day the dragon chooses his new apprentice, he doesn't pick Eon. Defeated and deflated, Eon makes his way away from the ceremony, when something unprecedented happens. The Mirror Dragon appears, the most honored of all the dragons, who has been missing for 500 years. The Dragon chooses Eon to be dragoneye, immediately elevating poor, cripple Eon to Lord Eon. The most prestigious among all the twelve dragoneye members.

The only problem is that Eon has a secret, one that could cause immediate death if it were ever revealed. Eon is really Eona, a sixteen year old girl, pretending to be a twelve year old boy. She has adjusted to her life of secrecy, and has to be even more vigilant now that she is in the spotlight. And with great power and status comes high powered friends, and high powered enemies.

Many plot twists unfold in this well thought out and well planned novel. The only problem was the fact that the novel was really spaced out. Leaving long moments that felt we were holding up the story. This was bothersome enough that I took a star away from my rating. Everything else about this story was wonderful, with excellent character development and supporting characters.

Lady Dela - The complete opposite of Eona in every way. She is man, living life as a woman. Considered to be good luck and an honored position to the emperor. She is honest about everything and is instructed to teach Eon the ways of court life.

Ryko - All around bad ass, he is the ultimate jock with a caring and lovable side. Loyal to the bone. He is in charge of protecting Lady Dela and Lord Eon.

Prince Kygo - I have yet to completely understand this character. He is bound by duty and honor but still believes in the more human emotions of love. Eona also seemed to be crushing on him in a way that even she did not understand.

There are many other amazing characters to mention such as Chart, Dillon, master, and Lord Tyron

Wonderfully written, beautifully crafted. Welcome to a world so amazing you want to call it home, but you might just be a little afraid to do so.

Recommended for people who enjoyed:
The Demon King or The Girl of Fire and Thorns
Posted by Kelley Lee at 12:35 PM
Email ThisBlogThis!Share to TwitterShare to FacebookShare to Pinterest