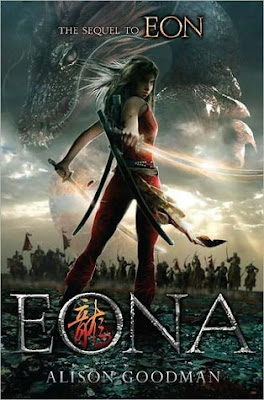 Eon has been revealed as Eona, the first female Dragoneye in hundreds of years. Along with fellow rebels Ryko and Lady Dela, she is on the run from High Lord Sethon’s army. The renegades are on a quest for the black folio, stolen by the drug-riddled Dillon; they must also find Kygo, the young Pearl Emperor, who needs Eona’s power and the black folio if he is to wrest back his throne from the self-styled “Emperor” Sethon. Through it all, Eona must come to terms with her new Dragoneye identity and power—and learn to bear the anguish of the ten dragons whose Dragoneyes were murdered. As they focus their power through her, she becomes a dangerous conduit for their plans....

Eona, with its pulse-pounding drama and romance, its unforgettable fight scenes, and surprises, is the conclusion to an epic only Alison Goodman could create.

Title: Eona
Author: Alison Goodman
Release Date: April 19th 2011
Publisher: Penguin Group
Where to buy: Barnes and Noble, Amazon
Review:
Eona was all I expected and more. It is rare that you hear such good things about a novel, and a sequel at that, and it turns out to be as epic as they said. The conclusion to Eona’s story was a heart pounding end to the journey that was Eon and Eona. My compliments go out to Goodman, who managed to end the story without going into too many specifics, but allowed us to get to know our characters so well that we actually have a clear image of what becomes of them after the words stopped.
Eona is more, everything, than Eon was. I hope it was due to the pure fact that she was embracing her inner self, instead of hiding behind a mask that was created. Eona deals with many of the same problems in Eon, but this time she has more fight to her fury. Beautifully depicted and full of wonderful imagery. It was very different from Eon, when I felt the descriptions were sometimes lacking in holding my interest. I was drawn in by every single word written in Eona, flipping the pages so quickly, I gave myself paper cuts.
There is only one complaint that I have about Eona and that is a certain point near the end, there is a situation that seems unrealistic to me. Goodman did such an amazing job creating her characters that when one of them does a one-eighty for a family member, it unsettled me as very out of characteristic for them. I do not want to give out any specific details, because then I would have to haul out the spoiler warning, but I believe you will know what I mean if/when you read it. And I highly recommend you do.
Everything else about Eona was perfect. The writing that I grew to love in Eon pulled me deeper in Eona. Eona was much more regal in this novel, coming to terms with being a woman after hiding for so long. She embraces her status as Dragoneye, and learns more about the wonder and art that binds her to her Dragon.  Never again will I be cautious about a novel with dragons in it. This is a book that will stay with me for many days to come, thinking back on the wonderful and majestic world that I held in my fingertips.
My recommendation is that you go to your local bookstore and grab a copy of both Eon and Eona, turn off your phone or computer and settle in for an adventurous ride. My world has changed dramatically after reading this. I feel myself thinking like Eona, deliberating and trying to find her cunning ability when I face certain situations. One thing that I learned for certain while reading, is even in a world that men rule, women will conquer.
Rating:

Recommended for people who enjoyed:
The Demon King or The Girl of Fire and Thorns
Posted by Kelley Lee at 9:49 AM
Email ThisBlogThis!Share to TwitterShare to FacebookShare to Pinterest