The rules are simple, pick a favorite book of your past, and post about it. You can pick a quote from the series, post the blurb, maybe write what was your favorite thing about the book. Pick a book that you haven't read for a long time, and spread the word about it's awesomeness, in something less or shorter than a review. Once you have your Throwback posted, come here are post a link in the comment section.

The Blue is for Nightmares series! 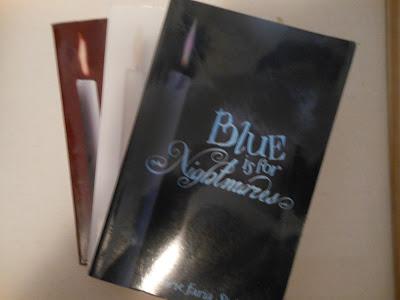 These books were a favorite of mine, there are actually four of them, but I lent the last one to my cousin and she still has it at the moment. The series includes (in order) Blue is for Nightmares, White is for Magic, Silver is for Secrets, and Red is for Nightmares. Written by Laurie Faria Stolarz. Here is the blurb for BifN...


Stacey's junior year at boarding school isn't easy. She's not the most popular girl at school, or the smartest, or the prettiest. She's got a crush on her best friend's boyfriend, and an even darker secret that threatens to ruin her friendships for good. And now she's having nightmares again. Not just any nightmares – these dreams are too real to ignore, like she did three years ago. The last time she ignored them, a little girl died. This time they're about Drea, her best friend who's become the target of one seriously psycho stalker. It started with weird e-mails and freaky phone calls. Now someone's leaving Drea white lilies – the same death lilies that have been showing up in Stacey's dreams. Everybody thinks it's just a twisted game . . . until another girl at school is brutally murdered. There are no witnesses. Worst of all, no one has a perfect alibi. With everyone as a potential suspect, Stacey turns to the one secret weapon she can trust – the folk magic taught to her by her grandmother. Will Stacey's magic be strong enough to expose the true killer, or will the killer make her darkest nightmares come true?

Are you intrigued yet? Well how about this teaser... 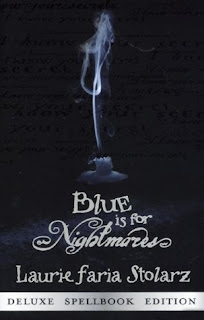 "Pj's mouth fills with even more laughter when he sees it, and his snakelike tongue writhes and twists out his mouth, trying to break free. Madame folds the test into a paper airplane ans launches it at me. The plane circles the room a few times, but then lands on the center of my desk. I open up the folds and blink at the mass of words written in large red, block letters across the paper: YOU KILLED MAURA AND DREA WILL BE NEXT.

'No, I didn't!' I scream. 'I didn't kill her!' My shriek wakes me up and everyone is just...staring. It takes me a second to put it all together, that somehow I nodded off to sleep, right here, in the middle of class."- Page 30

Not only was this story really fascinating, it also had one of the best secondary characters ever, Amber. Be ready to laugh, be scared out of your mind and try to solve the mystery with Stacey! And above is a picture of the newer edition's cover. I love the theme they have with the smoke on the new covers, and I am really happy they kept the candles.

Hope you enjoyed this weeks Throwback Thursday. Feel free to post your old favorites, or post a link to your own post! Just be sure to link it back to here!


Happy Reading!
Posted by Kelley Lee at 7:24 AM
Email ThisBlogThis!Share to TwitterShare to FacebookShare to Pinterest