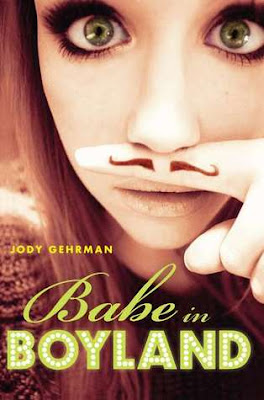 
When high school junior Natalie-or Dr. Aphrodite, as she calls herself when writing the relationship column for her school paper-is accused of knowing nothing about guys and giving girls bad relationship advice, she decides to investigate what guys really think and want. But the guys in her class won't give her straight or serious answers. The only solution? Disguising herself as a guy and spending a week at Underwood Academy, the private all-boy boarding school in town. There she learns a lot about guys and girls in ways she never expected-especially when she falls for her dreamy roommate, Emilio. How can she show him she likes him without blowing her cover?

Babe in Boyland...words that come to mind...witty, fun, fluffy. This book is very similar to the movie She's the Man, but instead of going undercover to play soccer, Natalie (alias Nat) is going for a story, to find out who guys are underneath it all.

It is an intriguing topic, but of course it leads to a predictable outcome. Our leading lady is caring and kind. In the beginning she has an epiphany that she only tells people what they want to hear, even if it is far from the truth.

She goes to an all boys private academy for a week to find her answers, from the source. Her two best friends happen to be doing a play at the school (because of the lack of girls) so she gets to stay in touch. She experiences the outcast vibe of boyhood. Not being strong and muscular aka athletic leaving her on the sidelines of the popular guys in the beginning.

Only after being caught in a prop closet with her best friends after play practice one night, by Mr. Popular, is she finally accepted into the inner sanctum of the cool guys. 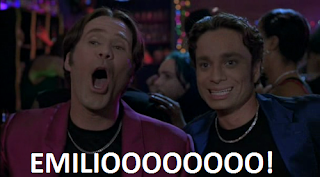 Oh, and of course her tasty roommate Emilio (Try saying that without shouting it like Will Ferrell in a Night at the Roxbury) is an oh so intriguing dish. Nat starts having feelings for him, who happens to be the leading man in the play, and co-starring with Natalie's not so bestie Summer. But she can't come clean about her feelings and stop Summer from moving in, because well, she is supposed to be a guy. Not only that, but Emilo (there it is again) has set her up with his sister. Talk about skirting on the edge of disaster. although this experience proves to be helpful for Nat, in discovering that maybe there is no ultimate secret. Maybe, girls are just as much of a mystery, unique to themselves, there is no secret code.

Nat's disguise is unraveled and lessons are learned. This is your typical girl pretends to be guy, girl likes guy, guy sets girl up with sister, maybe guy likes girl story. Great light read for those days that you are just looking for some simple easy entertainment.

Recommended for people who enjoyed:
Playing Hurt or The Boyfriend Thief
Posted by Kelley Lee at 12:14 PM
Email ThisBlogThis!Share to TwitterShare to FacebookShare to Pinterest