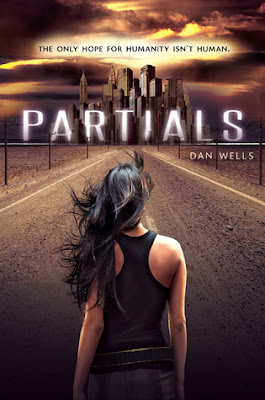 The human race is all but extinct after a war with Partials--engineered organic beings identical to humans--has decimated the population. Reduced to only tens of thousands by RM, a weaponized virus to which only a fraction of humanity is immune, the survivors in North America have huddled together on Long Island while the Partials have mysteriously retreated. The threat of the Partials is still imminent, but, worse, no baby has been born immune to RM in more than a decade. Our time is running out.
Kira, a sixteen-year-old medic-in-training, is on the front lines of this battle, seeing RM ravage the community while mandatory pregnancy laws have pushed what's left of humanity to the brink of civil war, and she's not content to stand by and watch. But as she makes a desperate decision to save the last of her race, she will find that the survival of humans and Partials alike rests in her attempts to uncover the connections between them--connections that humanity has forgotten, or perhaps never even knew were there.
Dan Wells, acclaimed author of I Am Not a Serial Killer, takes readers on a pulsepounding journey into a world where the very concept of what it means to be human is in question--one where our humanity is both our greatest liability and our only hope for survival.

Wow, what to say about Partials. It was moving, innovative, mind-blowing, and so much more. I appreciated the technical aspect of Partials. Dan Wells brought us inside the mind of Kira who is studying to be a nurse where she hopes to find the cure for RM and finally allow the world to have a living baby.

Dan Wells did an excellent job creating the setting of the novel. I was so wrapped up in how the world fell apart, my heart was beating faster with every new development. I could see everything he said happening in some distant future. The world creating some kind of human look-a-like robots that can see, breathe, and feel like humans, to fight in wars for us.

I loved Kira, and her bravery. She is the type of character that will never see something wrong happening and ignore it. She steps in and does her best to change it. Which is where tension lies between her and her boyfriend, Marcus. He wants to keep Kira on Long Island, he doesn't care if they cannot have children because they die of RM, he just wants them to live out their lives together in peace. But she refuses to sit by and let the world crumble around them. Whether she has to oppose Marcus, or the entire government she doesn't care she will stop at nothing to achieve her goals.

I wish I had a piece of Kira power in me. She is a kick-donkey-kong-ass type of character. Like a mega-Buffy, but instead of tackling her opponents with pure force, she destroys with knowledge, science, and her determination to never give up. BOMB-DIGITY! One bonus to this beautiful story is that this is no insta-love story. You know the kind that makes you want to shoot your brains out just to stay away from the slime of love at first sight. It is a slow building web of friendship, trust and similarities between ideologies. Don't get me wrong, Marcus is a great character and cares for Kira a lot, but when you meet Sam, he is completely swoon worthy. Don't worry your pretty little heads about a locked up love triangle either. There really isn't any of that, Kira is a very realistic decision maker, so I trust her not to take us to grossville with an episode of I love him, no I love him. When she makes a decision she is serious about it, and there won't be any turning back.

Just like you wont turn back after reading this book!

Recommended reads based off Partials:
Under the Never Sky and Divergent
Posted by Unknown at 10:42 AM
Email ThisBlogThis!Share to TwitterShare to FacebookShare to Pinterest