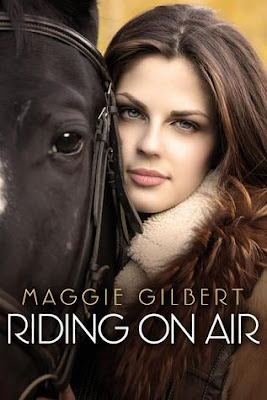 
For readers of Jenny Downham, John Greene and Maureen McCarthy, a poignant young adult romance about following your dreams and realising what really matters.
What can you do when your own hands are the enemy? Hold on tight, for as long as it takes.
Melissa has secrets. Sure it’s pretty obvious she has Juvenile Rheumatoid Arthritis, but no one knows how bad it is or how many pills she takes for the pain. She’s determined to make her horse Jinx into a champion and she dreams that her childhood friend William will one day see her, rather than her condition.
So when William asks her out and Jinx is shortlisted for selection in an elite training program, it seems Melissa’s dreams have come true. But when her secrets are exposed, all those dreams come crashing down around her. Can William ever forgive her? And can she learn about letting go in time to truly ride on air when it matters most?

Review:
This story fell way short for me. I have to say it was okay, nothing special about it, it was just a story. Boring and drawn out. This would have been a great idea for a short story, but it was unevenly paced and just so downright simple. No complexity. The only things I really did enjoy were how factual it was about horses, something I very much enjoy and the setting of being around horses.

I picked this up with the expectations of getting to live in the horse world, and I got that but it fell so flat, too flat for me to even say I liked it. I can only describe it as ehh...okay...I guess. I would not recommend it, unless you were just dying to read it. There is no complexity to the story. Yes our main character Melissa has JRA which would be devastating for someone who just wanted to ride and couldn't hold the reigns.

I felt this book could have been promising. I could have had more interesting and compelling plot twists. Instead it ended exactly the same boring way it started. I was hoping this would be the kind of story that would have more to it than meets the eye, so if you do decide to read this don't make the same mistake I did. She has JRA and she always will, it isn't going to miraculously get better or find a way for her to be able to use her hands.

Another piece of the disappointment was the insta-love quality. So Melissa has been in love with William for forever. She has admired her older brothers best friend from afar. Now all of a sudden he is showing interest in her and telling her he has had feelings for her for forever even though bombshell looking babes throw themselves at him all the time. Apparently he couldn't go after her till she was 16 because he would have looked like a perv to her brothers because he is 18. This part seemed ludicrous to me since they have always been two years apart, but I don't want to nitpick.

One other thing I enjoyed was her step-mother Jenny. She was a nice and positive step-mother something that isn't always portrayed as so. Which was unexpected. I just wish there could be more of those unexpected characters twists. Minus all the self-consciousness and just grow a pair, get out there and make shit happen. Instead of all these random, I am not good enough for him moments. I want a story I read to be more than that! And I don't think that is unfair or unrealistic of me.

Reads that won't make you disappointed or upset:
My Life Next Door and Such a Rush