The Year of the Great Seventh 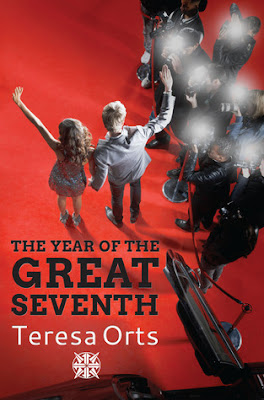 Goodreads Summary:
Sophie has always felt out of step — an outsider, even amongst friends in her high school with all the hype about celebrity culture. Her life in L.A. seems to have been already written for her, but when her junior year starts, it all takes a drastic turn. When she crosses paths with the school's heartthrob, Nate Werner, they fall for each other in a way neither can understand. What they don’t know is that by giving in to their desires, they are unlocking an ancient Egyptian prophecy that threatens to return Earth to the dark ages.

To undo the curse, Nate and Sophie embark on an adventure that takes them across the country. But their quest is not only to save the world as they know it. It is also a fight for their very survival. Behind the scenes, there are those that are counting on them to fail.


Title: The Year of the Great Seventh
Author: Teresa Orts
Publisher: Drayton Press
Release Date: July 6th 2013
Rating: 3.5 Stars
Review:
So, in the beginning you are going to get the setting for a rather generic begining of a relationship. Also you will get a lot of tell vs. show. However, once the plot gets rolling, so does your heartbeat and you are sucked in to this ya-fantasy. Orts gives us a very interesting story outline...Egyptian Prophecy...oh yes, I think so. It really is an exciting ride, although when I first heard of the story I thought for sure it would be taking place in Egypt, and it actually does not, it takes place in Los Angeles and New York. I found myself many times so wrapped into the story, I could actually picture myself on the streets of New York.
So as Nate and Sophie are on the hunt for clues to save Nate's life, we are drawn in more and more as hints are dropped, and you have to make sense of. While this is a fantasy story it has a strong sense of realistic fiction as well a mystery all in one. All elements combine forcing you to keep the book in your hands until you are finished.
So to the Positives...
A very intersting story line that draws you in and has you begging for more.
A cleverly laid out plot that allows the reader to try and piece the mystery together along with Sophie and Nate.
Descriptive quality
Quirky and inteligent characters
The dowfalls...
The beginning is slow and drags on, couped with teen angst for the first few chapters
A little too much telling whats going on rather than letting the reader experience it
I am very excited for the sequel. Since we already know our characters we wont have the beginning character building that caused the beginning to drag on a little long, so it should dive right in to some more heart-pumping action. I hope you write fast Orts!

Recommended reads based off of The Year of the Great Seventh:
Tiger's Curse and Banished from Grace