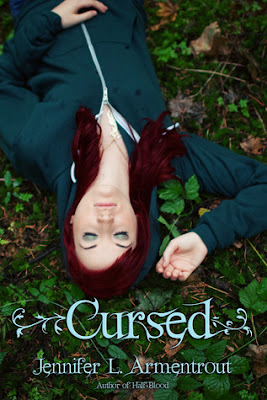 Dying sucks
...and high school senior Ember McWilliams knows firsthand.
After a fatal car accident, her gifted little sister brought her back. Now anything Ember touches dies. And that, well, really blows.
Ember operates on a no-touch policy with all living things--including boys. When Hayden Cromwell shows up, quoting Oscar Wilde and claiming her curse is a gift, she thinks he's a crazed cutie. But when he tells her he can help control it, she's more than interested. There's just one catch: Ember has to trust Hayden's adopted father, a man she's sure has sinister reasons for collecting children whose abilities even weird her out. However, she's willing to do anything to hold her sister's hand again. And hell, she'd also like to be able to kiss Hayden. Who wouldn't?
But when Ember learns the accident that turned her into a freak may not've been an accident at all, she's not sure who to trust. Someone wanted her dead, and the closer she gets to the truth, the closer she is to losing not only her heart, but her life.
For real this time.

Gahhh! A little to lovey but it was decent. Reminded me a lot of Dark Visions by L.J. Smith. The collection of people with powers. I love Armentrout and will cowtow to her till the day I die, but this book was less than miraculous. Simply plain. There is a bit of choke-me insta-love brewed here that was sappy and sickening that rubbed me in all the wrong ways. Maybe I would have flown for it in the past, but after reading so many amazingly wonderful loves, I cannot accept this as even close to one of them.
I hate that her best friend was abandoned and forgot her. It was so terribly and he could have added so much to the story. He was a great character one that if Armentrout would have kept him, could have kept the story to a four-star rating, but instead you get three. Oh so sad, but that is the truth of life. You cut out great characters, you only get a good book.
The fact that she couldn't be touched was very much like Shatter Me, in that if anyone touches her, they will die, except of course the love interest, because what fun would that be. The little sister was a good character but I thought her part was way overplayed. She was actually annoying in how much of an angel she was. Little kids are so bribed by sweets and toys that they cannot see real love if it smacked them in the face and that made me sad for Ember (which by the way is a cruel name for someone with red hair, even though it is an awesome name.)
Overall, the story could have been executed better. Too much mushy love, equals a less than happy Kelley. Not a waste of time, but I definitely could have waited to buy it. Oh, well. Hopefully I have helped you in your own reading decision!

Since it is an Armentrout, I wish I could give it more, but I just can't. No where near as good as the Lux series.


Recommended reads based off of Cursed:
Shatter Me and Dark Visions
Posted by Unknown at 12:00 AM
Email ThisBlogThis!Share to TwitterShare to FacebookShare to Pinterest