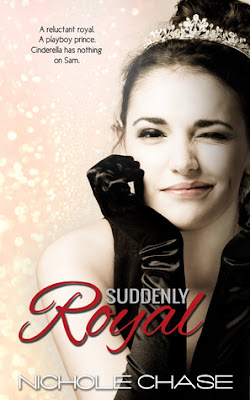 Goodreads Summary:
Samantha Rousseau is used to getting her hands dirty. Working toward a master’s degree in wildlife biology while helping take care of her sick father, she has no time for celebrity gossip, designer clothes, or lazy vacations. So when a duchess from the small country of Lilaria invites her to dinner, Samantha assumes it’s to discuss a donation for the program. The truth will change the course of her life in ways she never dreamed.
Alex D’Lynsal is trying to keep his name clean. As crown prince of Lilaria, he’s had his share of scandalous headlines, but the latest pictures have sent him packing to America and forced him to swear off women—especially women in the public eye. That is, until he meets Samantha Rousseau. She’s stubborn, feisty, and incredibly sexy. Not to mention heiress to an estate in his country, which makes her everyone’s front-page news.
While Sam tries to navigate the new world of politics and wealth, she will also have to dodge her growing feelings for Alex. Giving in to them means more than just falling in love; it would mean accepting the weight of an entire country on her shoulders.

Review:
Suddenly Royal is sweet, charming and a bit predictable. I mean what can you expect from a fairy tale. The writing was good not great and definitely improved from the first third of the book to the end, bringing it from a solid three stars to four. Nichole Chase didn't focus on the petty aspects of love and jealousy. This was a real, simple and to the point love story. With reluctance of new love, and acceptance of a new role or chapter in life.

I love Chadwick and many other supporting characters. I thought I would hate Bert in the beginning, (because lets face it, who loves Bert but Ernie,) but in the end I found he was one of my favorite characters even though we only get to see him a few times in the novel. Jess was also a fantastic supporting character too, much better than Cathy.

While Prince Yummy aka Alex was a great male lead, that any woman that loves men would swoon for and I admit I did swoon a little, he was just too perfect for my taste. I mean he never put any pressure on Sam, which is great in our fantasy worlds where it rains candy, but because of that I lost some of my realism in the book and couldn't quite become as absorbed in the characters as I would have wanted. I wish I could have had more dramatics with him. He had the potential to be so much more than just Sam's love interest and future king with a big..."bath tub." <--- if you decide to read it you will understand. Also I was disappointed that none of the story is told from his POV. When I read the description and it talked about him, I assumed I would be reading a bit through his eyes, obviously not the case. The whole story is told through Samantha.

Sam, was a great character and since I found out this was a series I hope it still includes her because I would love to see what she does next. I want to believe she will be getting back to some of the life she lived in Minnesota before she became a Duchess, but in Suddenly Royal she was more focused on her new duties, so she didn't have time for it her normal routine and life. Which I understood, that was part of her sacrifice when she decided to take her title, but I still felt like she might have let becoming a duchess change her personality, instead of her being herself. Either way I enjoyed her character the MN grad student, and the Duchess of Rousseau from Lilaria.

Speaking of Minnesota, thank you Nichole Chase for writing the first novel I have ever read that makes me smile instead of cringe at the people from the state or the description of it. While you did not talk much about my beloved state of MN I loved every piece you did write about it, which is hard to do since I am naturally a very critical person! And thank you for adding nature. I love the necklace she was given and the tiara with the vines she wore. I wish I had both of those pieces!

Overall this is a good story that is worth the few hours that it takes to read. I was pleasantly happy. It is a new adult book so expect some more erotic scenes, but I am thankful that it wasn't an all out sex-book with dirty situations on every page. While that may disappoint some of you readers out there I thought it was brilliant, because it wasn't so involved in sex and spankings that it lacked in the actual story. If you are interested in the more naughty scenes I can tell you there are only a few but they are definitely hot and steamy.

I would recommend you read it. A nice light story, that you will laugh about, that gets hot and steamy and makes you cry your eyes out.

Recommended reading based off of Suddenly Royal:
Star Crossed and Wide Awake
Posted by Unknown at 12:00 AM
Email ThisBlogThis!Share to TwitterShare to FacebookShare to Pinterest